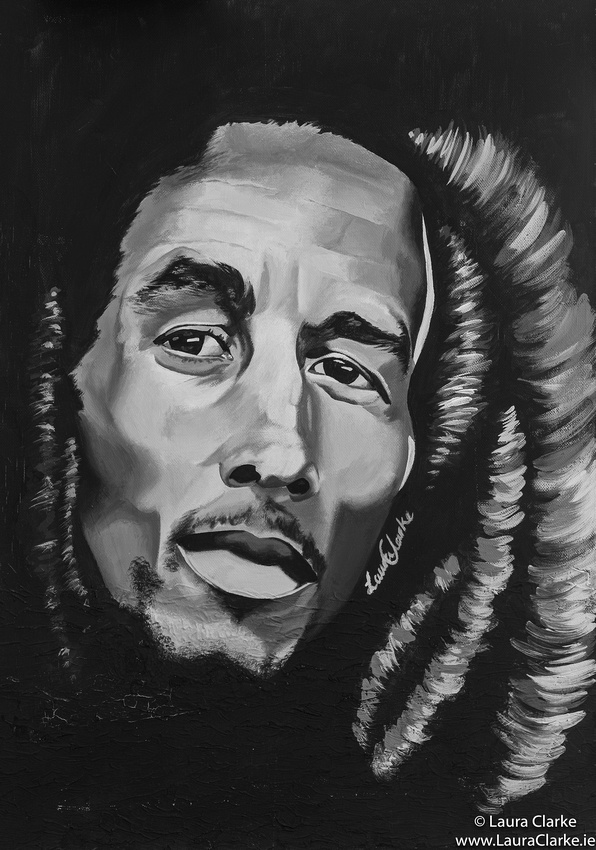 Laura loved music, one of her favourite artists was Bob Marley and her favourite songs included 'One Love/People Get Ready', 'Redemption Song' and 'Could You Be Loved'. Laura's interest in Bob Marley and Reggae started in her teenage years, when she'd listen to her parents playing his music. While out in the car together, Laura would turn up the volume to the Bob Marley music and, in the house, the glass would sometimes shake with the volume!

About the Canvas Painting and Digital Reproduction

Laura created the 60cmx46cm original Bob Marley canvas painting in June 2015. She'd spend hours on end on the creation. Laura was delighted with the finished painting and was thrilled by the positive feedback she received. The original work has now been digitised and high quality professional reproductions are now possible. This is the first of many of Laura’s creations which will be reproduced for a posthumous exhibition of her work later, when Covid situation improves. All of these works feature in the tribute book to Laura which will be printed in time for the exhibition.

Featured here, is a 140cm x 98cm canvas print, created using one of the world’s finest photo canvas materials from Hahnemühle Germany and framed (stretched) using fine quality hardwood timber. The print was produced using a 12-Colour certified inks iPF4100 professional printer from Canon. As a certified Fine Art printer, the digitised reproduction of the original artwork was produced personally by Laura's Dad - from digitising the artwork, studio editing of the image, printing the image, the making of the frame, mounting the canvas print to the frame, trimming and final assembly, ready for hanging.

If Laura could be here now, she’d be so chuffed, saying “Wow, that’s so cool”.

Born in February 1945, the singer, songwriter and musician was considered one of the pioneers of reggae. His musical work made him a global figure of Jamaican music, culture and identity. As a Rastafarian icon, he infused music with a sense of spirituality. He was also a controversial figure, calling for the legalisation of marijuana.

Born in Jamaica, his professional music career began in 1963, forming Bob Marley and the Wailers, with their debut album The Wailing Wailers launching in 1965. From the album's track "One Love" gained worldwide popularity, the group went on to produce a further 11 studio albums. Marley permanently relocated to London, England in 1976 after an assassination attempt while in Jamaica. It was in London that he recorded his famous album "Exodus" in 1977. He received a state funeral in Jamaica in 1981 after he died from cancer. His greatest hits album "Legend" was released in 1984 and became the best selling reggae album of all time. Bob Marley's music sold an estimated 75 million records worldwide. For more information about Bob Marley, visit the official site www.bobmarley.com